A key player in the offshore wind adventure 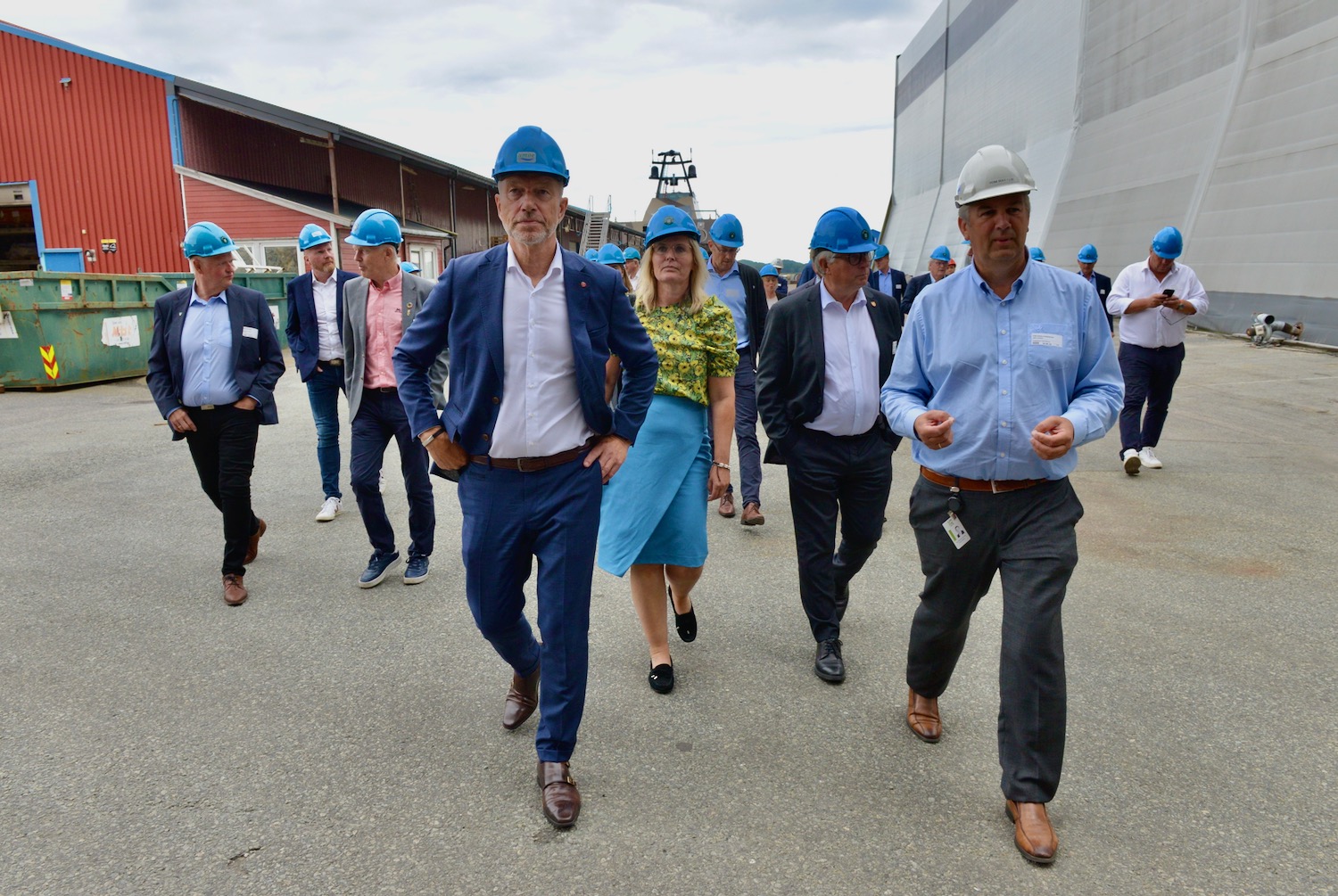 Minister of Petroleum and Energy, Terje Aasland (left), met parts of the supplier industry in Agder. They enjoyed a tour of Umoe Mandal with CEO Tom Harald Svennevig as guide.

"If Norway is to succeed in offshore wind, there is no bypassing the region of Agder."

The words from Terje Aasland, Norwegian Minister of Petroleum and Energy, could not be clearer, and they were of course well received at a meeting in Mandal, where 40 representatives from industry, business and the public sector met with the minister. The meeting was organized following an initiative from Aasland himself and his Ministry of Petroleum and Energy.

During a three-hour event, the minister got to know 12 companies from Agder that provide products and services to the maritime sector. They are all positioned to become suppliers to offshore wind, and some of them are in fact already suppliers to this industry.

Aasland also got first-hand information about the large port facilities that Windport Mandal and SoWe Energy in Farsund/Lyngdal are ready to provide for the emerging North Sea offshore wind industry.

Aasland was visibly impressed by what he saw and heard and made it clear that Agder will play an important role in what is likely to be new industrial adventure.

“You have an important competitive advantage in Agder. In addition to being positioned close to one of the first areas for Norwegian offshore wind in the North Sea, you have a culture for cooperation, strong business clusters, and a region that pulls in the same direction. This has already meant a lot for the development of the region’s business community, and it will have a big impact going forward,” said Aasland.

He also called for a new state administrative body for managing the announcement and license processing of offshore wind power development.

“Huge installations are to be built offshore. Today, the administrative apparatus in the energy sector is not designed to carry out these specialized tasks. A new administrative body is needed, and we believe that it should be located in Kristiansand,” said Klausen.

Aasland agreed that Norway should beef up its administrative resources for offshore wind, and encouraged Agder to relay this to the Government ahead of the national budget negotiations. He did not want to comment on where such an administrative body should be about located.

Rune Klausen also raised the issue of choosing a model for awarding offshore wind licenses. Klausen argued that price should not be decisive for choosing a developer, as it could easily give an advantage to well established foreign players in a new home market for Norwegian industry.

“We need a model that secures contracts for Norwegian suppliers. That way, we will be able to build our own expertise in this industry,” said Klausen.

Minister Aasland said he understood the concern, and believed that it should be possible to get a licensing model that takes into consideration the advantages the Norwegian supplier industry actually possesses.

ROBOTIC CRANES AND COMPOSITE
Aasland and his entourage came to Gismerøya industrial area in Mandal for a of Global Ocean Technology and later moved to Umoe Mandal shipyard. Enroute, the Minister met companies that are ready to deliver services to the offshore wind industry. Mette Harv, Executive Vice President at Nekkar, used her allotted two minutes to talk about Skywalker, a self-climbing robot that can carry everything from heavy turbines to rotor blades up wind turbine towers.

«This is a lifting technology we have developed in-house. It can replace heavy cranes and ensure cheaper, safer, and more efficient lifting operations at sea,” said Harv.

At Umoe Mandal, CEO Tom Harald Svennevig gave the minister a tour around the shipyard.
Among Umoe’s products are ships that bring people and equipment effectively t- and from offshore wind installations.

«Our supply ships can transfer personnel to and from installations safely and efficiently, also when waves run several meters high. We have Norway’s leading expertise in the construction of vessels and structures in superlight composite», said Svennevig.

AGDER IS WELL-POSITIONED
Aasland concluded that many wind power projects will take place in the North Sea basin and in Norwegian waters in the coming years. Currently, two licensing areas have been announced in Norwegian waters; Sørlige Nordsjø 2 and Utsira Nord. Aasland appreciated that Agder has good port facilities. Windport Mandal and SoWe Energy in Lyngdal and Farsund have deep-water quays and several thousand acres of harbor area at their disposal.

“We have short entry, deep-water quays with a depth of up to 50 meters, and 1,000 acres of harbor area at our disposal. We are also good at logistics and at handling large units,” said Øystein Sunde Pedersen, spokesman for Windport Mandal.

Mayor of Farsund, Arnt Abrahamsen, highlighted the qualities of SoWe Energy, which offers a large quay and great port facilities at Hausvik in Lyngdal and Lundevågen in Farsund.

“In view of the gigantic development plans in the North Sea, our ambitions are increased significantly. We have many competitive advantages as supply ports for offshore wind, and we know that supply ports act as powerful magnets for other companies in the value chain,” said Abrahamsen.

Summing up the meeting, Rune Klausen says: “Based on competence and technology from the supplier industry, Agder is extremely well positioned to play a central role in the development of offshore wind in Norway.”