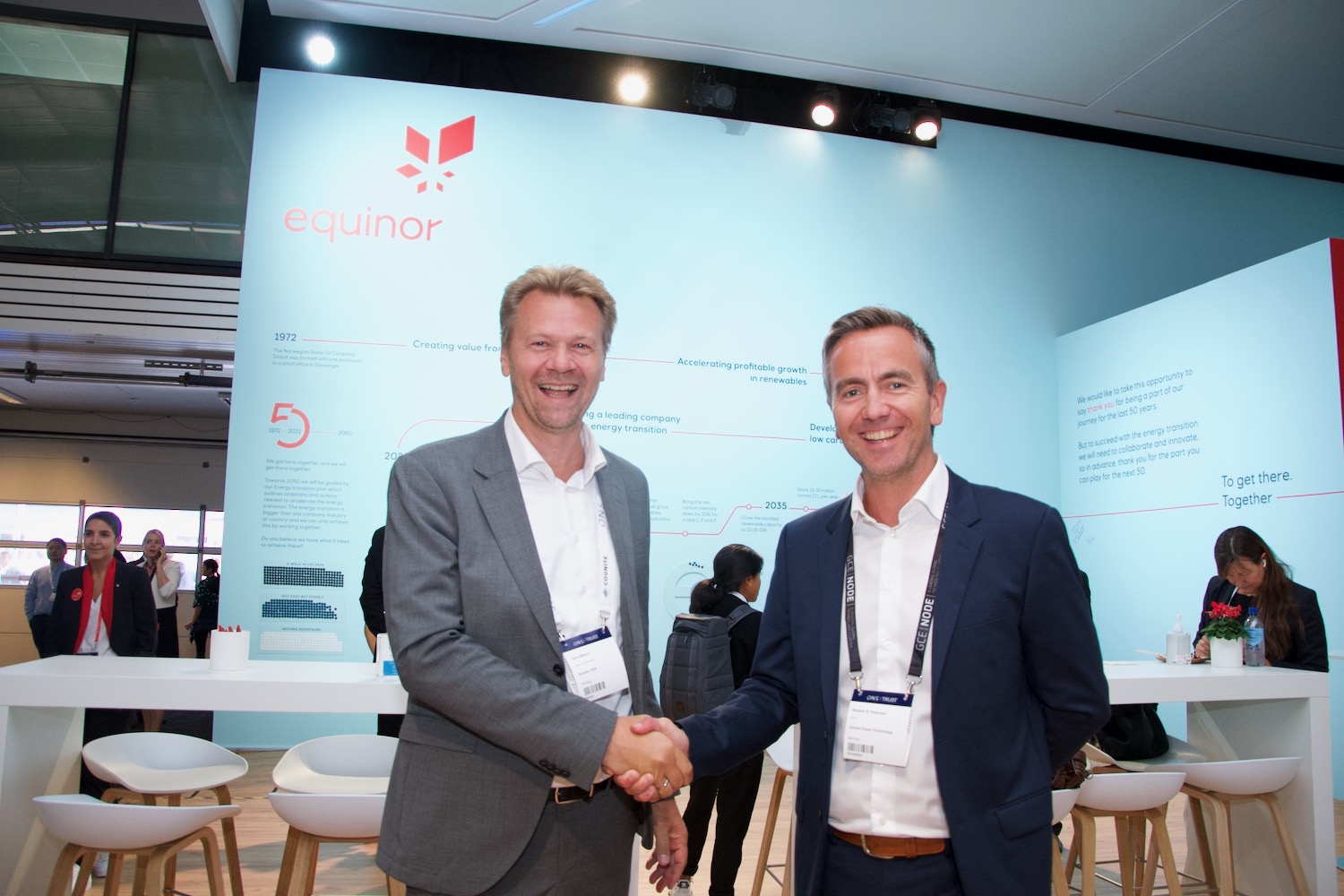 Handshake at the Equinor stand during the opening day of ONS in Stavanger. Jens Økland, SVP Business Development at Equinor (left) and Øystein Sunde Pedersen, CEO of Global Ocean Technology and Managing Director of Windport.

An offshore wind consortium consisting of Equinor, RWE Renewables Norway and Hydro REIN, has signed a Memorandum of Understanding (MoU) with Windport AS, a supplier of port facilities in the Mandal area.

Equinor, RWE Renewables and Hydro REIN jointly aim to develop a large-scale bottom-fixed offshore wind farm in the Sørlige Nordsjø II area in the North Sea. Windport AS, a wholly owned subsidiary of Global Ocean Technology, aim to provide port facilities for the development and construction phase of the wind farm. In the agreement signed with Windport AS, the parties have agreed to exchange and discuss information to assess feasibility for a potential industrial development, related to such port facilities. The agreement does not cover operations and maintenance base facilities. This is covered in a separate process towards potential Norwegian harbor locations.

“We are pleased to enter into this initiative. The Norwegian Government has set a target for offshore wind of 30 GW in Norway by 2040. The North Sea has among the world’s best wind resources. A large-scale offshore wind farm at Sørlige Nordsjø II could play a key role in expanding the North Sea as an offshore energy hub, and create new industrial opportunities,” says Arne Eik, project director for Sørlige Nordsjø II from Equinor.

“The expansion of offshore wind is a crucial factor for a successful energy transition in Europe. We at RWE will bring in our extensive experience and knowledge and contribute to help Norway in delivering its offshore wind ambitions, together with our partners,” says Matilda Machacek, Development Nordics RWE Renewables.

“Efficient assembly and logistics will be key to projects in the Sørlige Nordsjø. We are impressed by the proactivity and efforts from Windport and the municipalities in the area,” says Pål Tore Svendsen, Head off offshore wind at Hydro REIN.

“The planned offshore wind development in the Sørlige Nordsjø II area represents great business opportunities for the Southern part of Norway, and we are looking forward to jointly explore how the Mandal area can provide the port facilities needed, with Equinor, RWE and Hydro,” says Øystein Sunde Pedersen, Managing Director of Windport AS.

The Norwegian Government has announced that the first phase of the Sørlige Nordsjø II area will be auctioned during 2023, giving the winner the opportunity to develop a 1.5 GW windfarm that provides power to the Norwegian mainland.