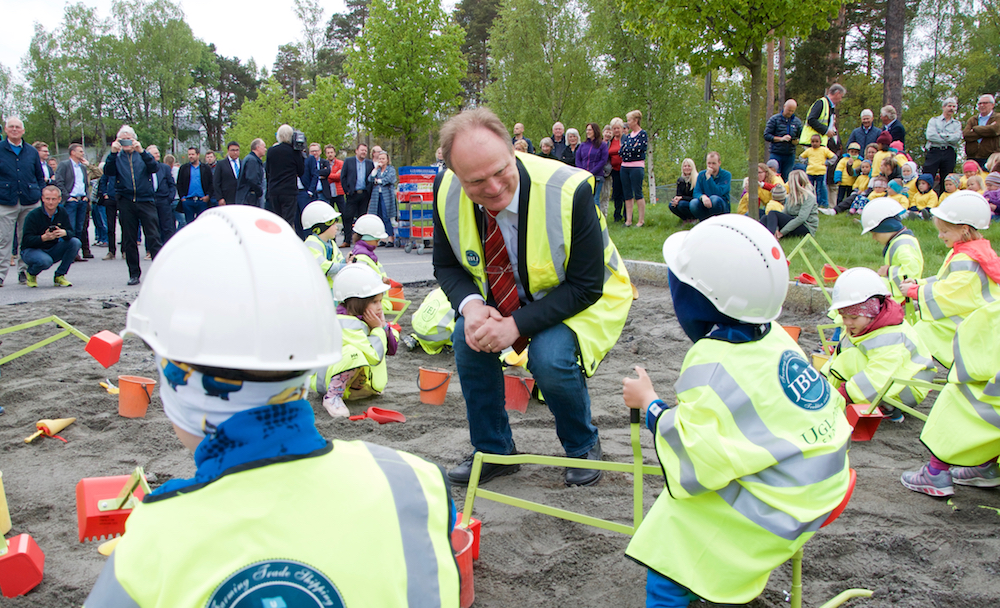 Rector Frank Reichert at the University of Agder helped out when children initiated the construction of Mechatronics Innovation Lab.

20 children from a kindergarten at the University of Agder’s Grimstad campus, equipped with miniature excavators, dug the first hole in the ground where the lab is scheduled to open August 2017.

“We are building a leading national research center and test facility, and one of the finest of its kind anywhere in the world! I am both proud and excited today”, said Frank Reichert, Rector at the University of Agder and one of the lab’s biggest supporters.

GCE NODE has emphasized the importance of a national lab where different industries can test new products. NODE companies and other companies have already pledged to spend more than MNOK 50 on research in the lab when it is completed.

“You hear a lot of negative things about the oil and gas industry these days. And for the short-term, things are negative. This however, is a long-term project. MIL is the start of a new era. It marks the shift from innovation based on a customer’s specification, to research-based innovation. This facility will be of great importance to our industry”, said Tor Henning Ramfjord, Chairman of GCE NODE.

“Mechatronics Innovation Lab will increase competitiveness in two ways: It will help us become better at what we are already good at, and it will enable us to find new markets for existing technology. MIL is also a vital part of a regional ecosystem for innovation, which will be completed as soon as the new seed fund is established”, said Ellingsen.

Former CEO of NODE, Kjell O. Johannessen, said the idea of a lab such as MIL was formed as far back as 2008.

“The idea came out of NODE’s ‘Future Committee’, which from 37 ideas discarded all but eight. A lab facility was something the whole industry saw a need for”, says Johannessen.

MIL will be hosted by the University of Agder, but built by J.B. Ugland. CEO Johan Martin Ugland was especially proud as one of the children in the ceremony was his son.

“This is a facility for future engineers. Some of them may be present here today”, said Ugland.