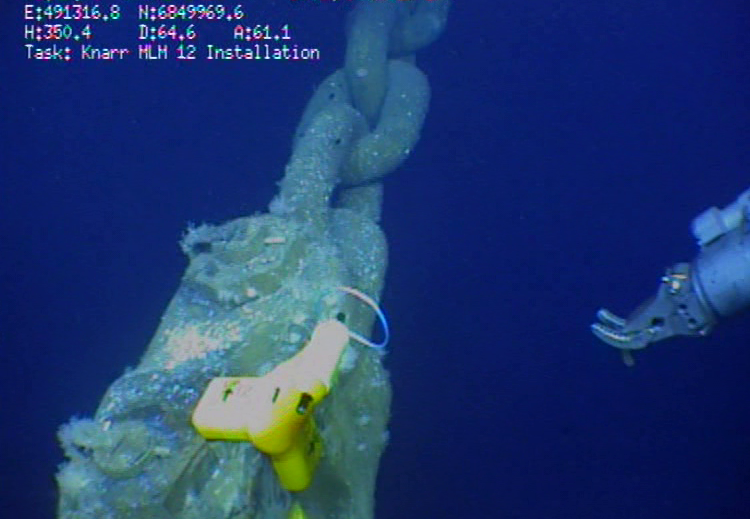 “We strongly believe this cost-effective solution is a game changer for mooring line monitoring,” Jørgensen continues.

Scanmatic collaborated with Teekay to implement the retrofit system for monitoring the integrity of the mooring lines of a FPSO located in the North Sea. The system uses very small inclination sensors with wireless hydroacoustic communication. In June 2019, each of the 12 mooring lines were at depths around 70 meters fitted with a magnetic ROV clamp containing two such sensors.

After a successful logging campaign using a receiver hanging from the side of the FPSO, a permanent installation was established. A novel method was used for installing the receiver in the I-Tube, an ATEX certified signal conversion cabinet was installed in the turret and the topside computer with Scanmatic developed SCADA software started receiving sensor data in the beginning of December.

“The basis for analysis is the data acquired between 6th and 16th of December. During this time there was a period of bad weather, visits from supply ships and use of the FPSO’s heading stabilizing thrusters, all of which are potential data degradation sources for hydroacoustic systems. The data source is thus believed to be a good representation of normal operation on the FPSO,” explains Jørgensen.

For this installation, the main sensors are configured to wake up every 14-16 minutes, perform an inclination measurement and transmit that information by use of sound, before going back to sleep. Estimated battery life is more than 10 years.

“Inclination measurements from all mooring lines are consistent and continuously updated. We achieved approximately 90 per cent transmission success rate during “good” weather and 80 per cent during “bad” weather. The data from the system forms a good basis for alarm handling and mooring line breakage detection,” says Jørgensen.