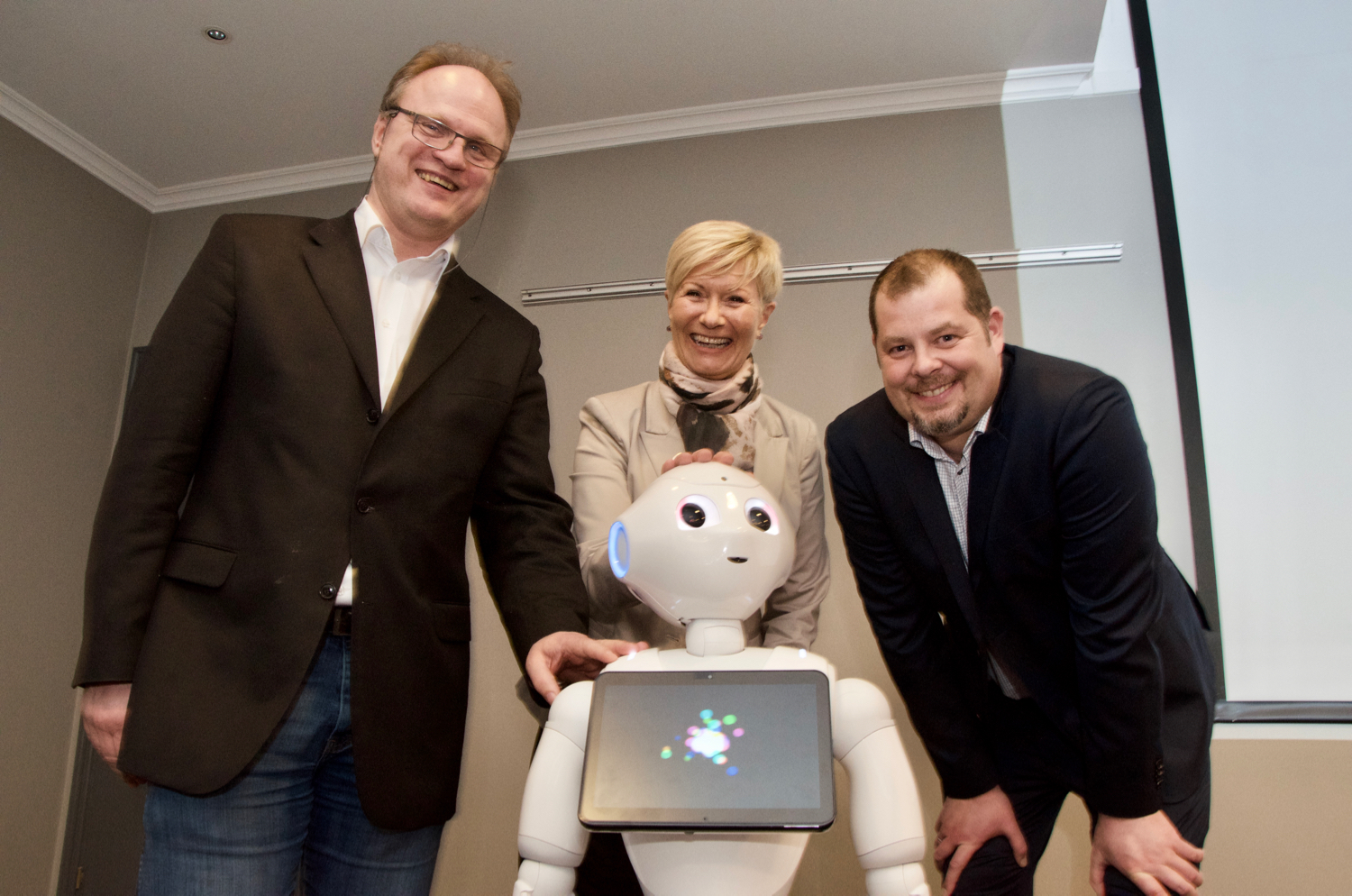 14 robot cells will in place when Mechatronics Innovation Lab opens in Grimstad on August 16th.

Bernt Inge Øhrn, CEO of MIL, brought one of the robots to Thursday’s GCE NODE Top Leader Forum. It was a brand new humanoid robot that listened closely to its master’s message – seemingly with genuine interest, or possibly programmed to act that way.

Øhrn and MIL has certainly done a lot of shopping lately. Total investments in MIL equipment has surpassed NOK 46 millon, with another NOK 30 million in the bank, purposely saved for the next round of investments.

At GCE NODE’s Top Leader Forum, Øhrn gave an enthusiastic presentation of what aims to be a world-leading center for innovation, piloting and qualification of technology within the field of mechatronics, which is a unique speciality for the University of Agder, the sole owner of MIL.

“But there will be lots of other areas represented in the lab. Automation and robotics will be a big part of what we do. That goes without saying in an era of digital disruption,” says Øhrn.

80 per cent of all machines that are ordered – and soon delivered to MIL – are new to Norway.

“MIL intends to be a center for ground-breaking, innovative solutions. We are not building a competitor to existing machinery and technology,” says Øhrn.

EASY TO PROGRAM
That is certainly also true for the 14 robot cells in MIL. The lab will have robots that no-one else has; collaborative robots, one-armed robots, two-armed robots and robots that can cooperate safely with humans.

“Our robots are very easy to program. They are not designed for mass production, but for series of one, which is typical for the industry in our region. These new generation robots are truly lowering the entry barriers to robots for SMEs,” says Øhrn.

A DREAM COME TRUE
For Frank Reichert, Rector of the University of Agder, listening to the progress of the soon-to-be-opened MIL is like a dream come true.

“With the exception of becoming a university, Mechatronics Innovation Lab was always our biggest dream. And now, we are only a few months from its opening. Fantastic! MIL is a result of a tremendous teamwork and a close relationship between the university and the industry. GCE NODE and Ugland have been invaluable partners, and politicians have found money that was thought to be unavailable,” says Reichert.

Anne-Grete Ellingsen, CEO of GCE NODE, is also a fan.

“I’m impressed! MIL seems to be moving very much in the right direction. The lab will be a giant playground for big girls and big boys. Just what we need to continue to build the region,” says Ellingsen.

NOV IS INTERESTED
It is perhaps easier to spot the advantages of MIL for small and medium-sized enterprises, which are unable to invest in infrastructure needed for testing and market qualification. But Frode Jensen, Managing Director of National Oilwell Varco, which has its own testing facilities in the region, also speaks positively about MIL.

STEINFELD ON RUSSIA
The presentation of MIL followed a 90 minutes lecture on Russia by former TV-correspondent to Russia, Hans-Wilhelm Steinfeld. He gave insight into Russian history and politics. Among other conclusions, Steinfeld stressed that the West needs to understand Russian domestic politics in order to understand Russian foreign politics. He also thought that Europe should give the American president Donald Trump more credit for knowing what he is doing.