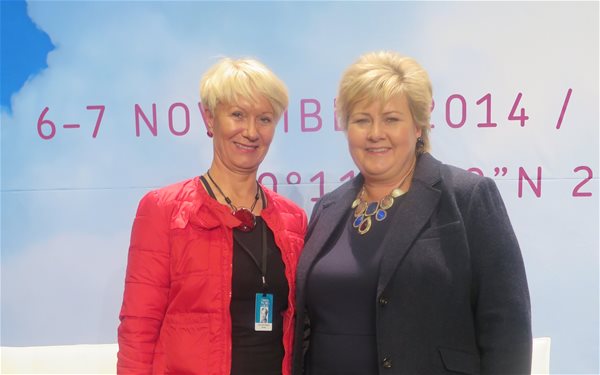 CEO of NODE, Anne-Grete Ellingsen, was invited to the Nordic-Baltic-British summit in Finland last week.

– We have had some very useful discussions about how the interaction between the industry and the universities can increase innovation capacity and competitiveness, says Ellingsen.

Along with four other Norwegian business leaders, Ellingsen was invited by Prime Minister Erna Solberg to attend the Northern Future Forum, where the five Nordic and three Baltic prime ministers attended, along with British Prime Minister David Cameron.

The conference is held annually as a Nordic-Baltic-British summit of government leaders, entrepreneurs and business leaders. This year’s theme was education and innovation.

– I explained that the technology companies in Agder are very innovative and have a strong and close relationship with The University of Agder, says Ellingsen.

She also talked about the plans for the Mechatronic Innovation Lab (also known as Sørlandlab), which could be Norway’s first and only pilot test lab.

– Many countries have invested heavily in laboratories for research, but little in laboratories whose goal is to qualify new products for the market. This is a gap in the innovation system, not only in Norway, but also in the Nordic and Baltic countries. Britain focuses on the strategic importance of such a lab. I hope Norway will adopt the same view, says Ellingsen.