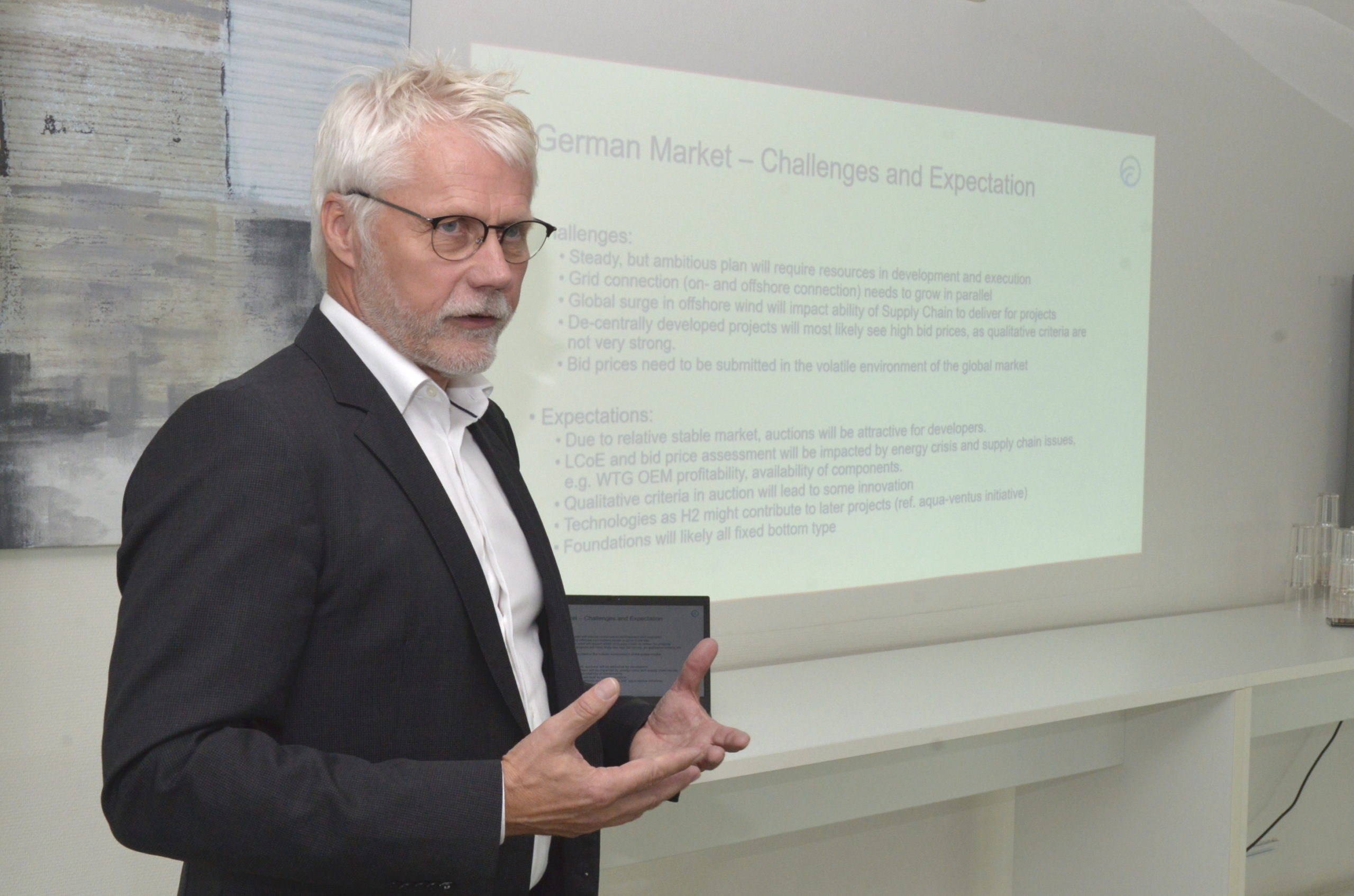 Offshore wind farms are increasing in size and numbers as the world’s thirst for energy grows.

“Enormous sums are to be invested in renewable energy projects. This presents great business opportunities. We expect an annual increase of 25-30 per cent in the offshore wind market in coming years, as wind power is becoming cheaper and more accessible,” said Klaus Udesen, Director of Wind for Denmark, Germany, UK and Ireland at Norwegian Energy Partners (NORWEP).

It was all about large numbers when Udesen presented a new NORWEP report on the global energy markets at the GCE NODE headquarters in Kristiansand. The report suggests annual investments of more than 200 million Euros in the global wind industry, wind turbines increasing in size from 15MW to 25 MW, and turbine towers reaching heights of 270 meters.

NORWEP explained how the global energy sector is driven by the war in Ukraine and the nations’ demands for a green transition. Governments are increasingly considering offshore wind as a major part of the electricity mix, spurred on by declining costs and increasing energy demand. New markets emerge across the world, while existing markets in Europe and the US are moving faster.

The US market is growing fastest, followed by Sweden, UK, Italy, Australia and Germany. In EU, the ambition is 150GW offshore wind by 2030.

A FEW GLOBAL PLAYERS
Udesen emphasized that wind turbines will be delivered by few and large global players.

“Size and numbers matter. Suppliers that can mass-produce wind turbines at reduced cost, will be awarded contracts. Major manufacturers prioritize deliveries to large wind farms, while anything less than 1GW is not prioritized,” said Udesen.

According to NORWEP, Norway has the necessary expertise and capacity to contribute with floating elements and anchoring systems for offshore windmills. Norway also has great advantages when it comes to providing industrial sites for the assembly of wind turbines, and port facilities for maintenance and service.

UPTURN FOR OIL AND GAS
The NORWEP report also addressed the oil and gas sector, which is facing an upturn in activity levels. Håkon Skretting, Director of Oil&Gas at NORWEP, expects annual growth of at least 5 per cent in years to come. Skretting pointed out that Russia supplied Europe with three million barrels of oil and 300 million cubic feet of gas daily, before the Ukraine war led to an abrupt halt in deliveries.

“Large parts of this volume must be replaced. At the same time, soaring energy prices have fed large oil companies with tons of cash. They are searching for development projects that can be realized quickly and bring more oil and gas to the market”, said Skretting.

Those who predicted an imminent decline of fossil energy, will be proved wrong. The forecasts indicate steady growth in the demand for oil and gas till at least 2030. Norway is among the countries that are about to invest heavily in this sector.

“We are facing a small boom for oil and gas. As a result of higher energy prices, several fields that were considered unprofitable, have now become profitable,” said Skretting.

“Our market reports are replaced by a searchable and constantly updated project data base. We keep track of 90 per cent of the global markets for offshore wind and oil and gas. This will be a very important tool for our members,” said Skretting.