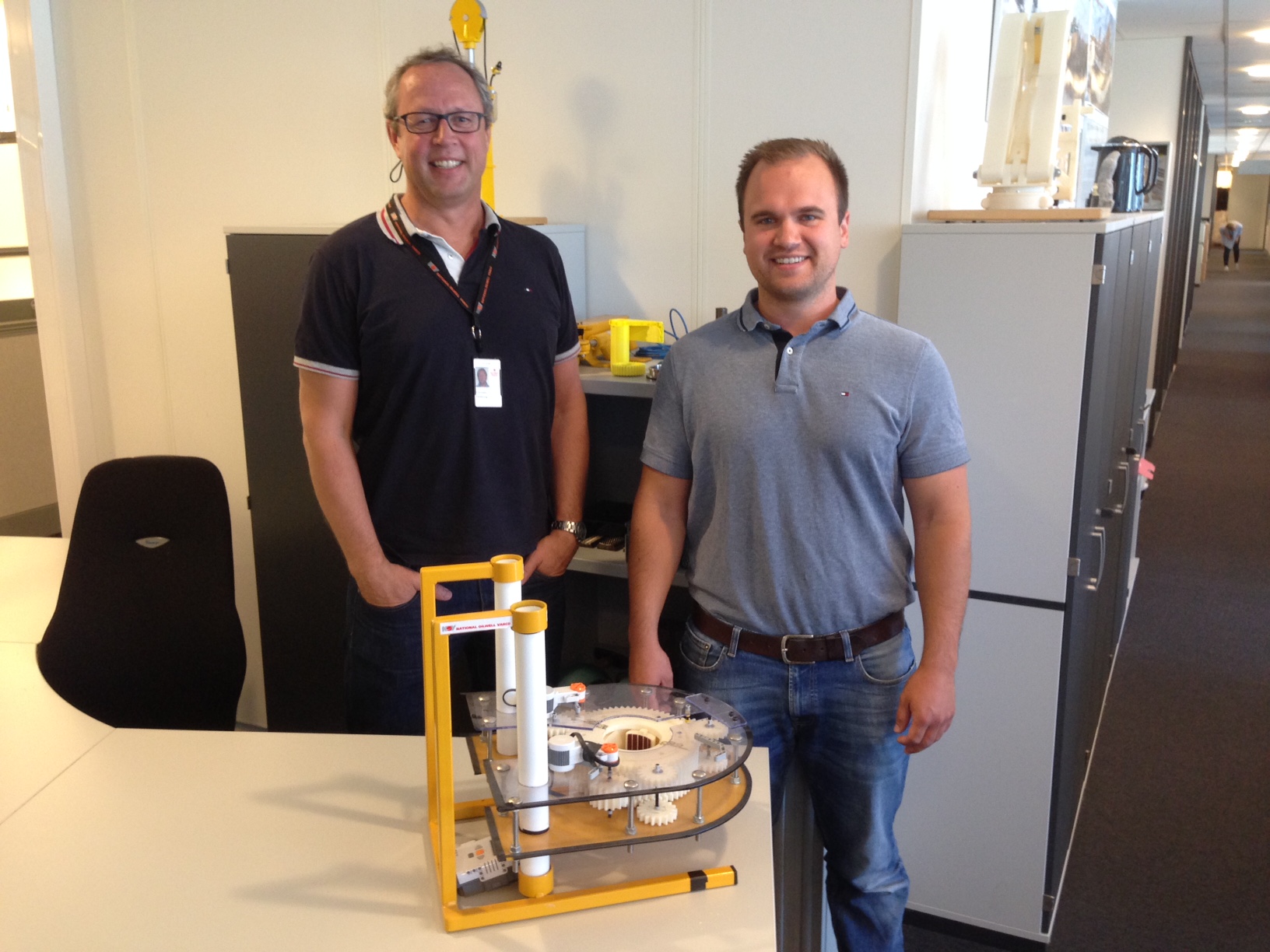 After writing his bachelor’s thesis for National Oilwell Varco in 2012, Erlend Bjønnum was hired by NOV to design new and develop existing equipment.

“Erlend is an incredibly nice and talented guy. It didn’t take me long to understand that we should hire him”, says Henning Grosaas, Group Manager Rotating Equipment at NOV.

Grosaas was Bjønnum’s supervisor when working on a bachelor’s thesis named “Continuous, rotating machine”. Bjønnum and three fellow mechatronics students at the University of Agder were the authors.

“At NOV, we define different tasks that are presented to students. These may be tasks that we can’t find time to do ourselves, or they may be tasks that we would like someone who is not influenced by our way of thinking to look into. Students supply NOV with important knowledge that they have acquired through their studies”, says Grosaas.

Bachelor candidates and a supervisor from the University of Agder visit NOV in January to receive information about the different tasks, and thoughts about how NOV would like to see them solved. A week later, students are back to give their own thoughts.

“And then we start. It’s up to the students to decide how much they want to involve us in the process; once a month, more often or not so often”, explains Grosaas.

Bjønnum and his fellow student worked mostly on their own.

“NOV wanted us to think outside the box, so we worked very independently. We had regular meetings first biweekly, then monthly, to report on our progress. When we were finished, we presented our work for NOV, and received constructive feedback which was of great value to us before we were to present our work for sensors at the university”, says Bjønnum.

The student’s concept of a continuously rotating machine was 3D printed, and NOV used the group’s finding in its further work on developing the concept.

LEARNED A LOT
“The cooperation between the university and NOV works perfectly. Over the past years we have had several master and bachelor students at NOV. We always learn a lot, and it is interesting for us to guide the students. It is also an opportunity for NOV to promote the company for students, as we look to make good recruitments”, says Grosaas.

When Bjønnum started at the Mechatronics course at the University of Agder, he had already decided to write a bachelor’s thesis for a large enterprise.

“I view the work on my thesis as a long-term application process, a golden opportunity to show off my skills and abilities. After graduation, three of the four in our group were employed by NOV. The fourth guy accepted a job in Oslo”, says Bjønnum.