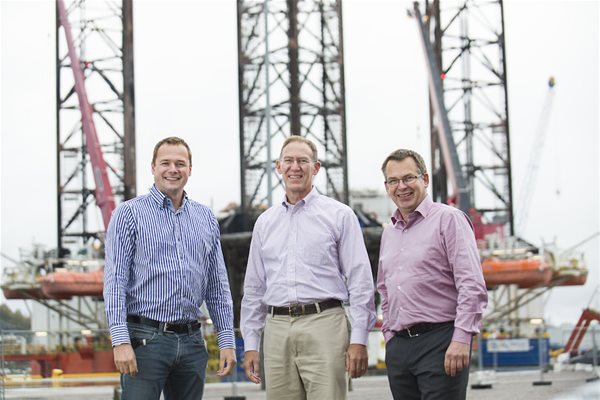 – Condition-based maintenance is what everyone in the oil and gas industry talks about. It is part of the IT-revolution, which will have a great impact on the industry. Teknova will play a significant role in CBM, in cooperation with NODE-companies and the University of Agder, says CEO Klaus Schöffel in Teknova.

– I look forward to working with Teknova. I believe our technology and expertise can help lift the oil and gas industry into the future, says CEO Eric Bechhoefer in GPMS.

He has in-depth knowledge of condition monitoring of mechanical components in wind turbines and helicopters. CBM-technology is in large developed by and for the helicopter industry, which 20 years ago had to address an increasing number of accidents.

– The technology is relatively new. As late as the year 2000, it was installed in helicopters. By providing early signals of wear and possible failure of components, CBM-technology has saved many lives and prolonged the lifecycle of helicopters by up to 50 percent, says Bechhoefer.

COST REDUCTIONS
Teknova looks to transfer CBM-experience and -knowledge from other industries to the oil and gas industry. Future oilrigs and drilling ships will have thousands of sensors that continuously report vibrations, temperature and pressure in the equipment. Data is collected and interpreted and, by using mathematical models, the remaining lifetime of the equipment is estimated.

Monitoring the condition of mechanical equipment has two advantages: First, equipment which is about to collapse is detected at an early stage, early enough to prevent accidents and unexpected downtime. Second, maintenance is done only when needed, not at predetermined time intervals. Both save the owner of the equipment for large sums of money.

– To achieve this, we need to develop smarter sensors and a better understanding of what the equipment is actually trying to tell us. It requires a combination of industrial experience and knowledge of mathematics and modeling. That’s why we so strongly believe in the collaboration between Teknova and GPMS. Together we have the experience and the knowledge necessary for success, says Schöffel.

In January 2015 invites Teknova to a major workshop on condition-based maintenance. The workshop will be held in Kristiansand.