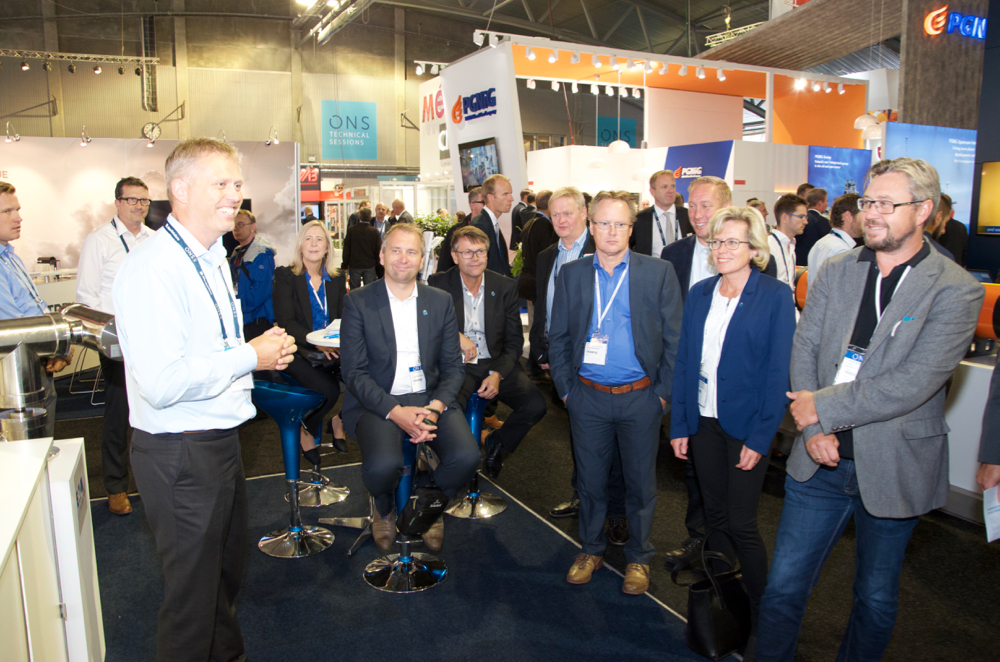 Jan Kristensen gave a presentation of Eaton for a group of representatives of municipalities and counties in Agder.

13 mayors, deputy mayors and senior bureaucrats from Agder followed a program put together by GCE NODE during ONS.

Representatives of Arendal, Grimstad, Mandal, Farsund, Lyngdal and Kvinesdal municipalities, in addition to Aust-Agder and Vest-Agder counties, hopped on a NODE bus to Stavanger.

“For us, as local politicians, it is important to participate at ONS. It gives us a better understanding of what our companies do, how we can contribute to their success and the challenges they face today”, says Deputy Mayor Terje Eikin in Arendal.

Along with Kåre Andersen, Director of business development in Arendal, he spent extra time with Arendal-based MacGregor, Norsafe and Eaton at ONS.

“Although we are already familiar with these companies, it’s nice to hear executives discuss the present situation and future prospects. I am incredibly proud of the companies from Agder, which are world-leaders in various fields”, says Eikin.

“NODE looked well after us and presented us for a number of companies from our region. An important part of the visit was to get to know the companies. We became more familiar with their challenges, and started a dialogue about what the municipality can contribute with in these difficult times”, says Wilhelmsen.

Together with Mandal Mayor Alf Erik Andersen, he had a second agenda: Finding customers to Mandal harbor.

“Although this may not the time for start-ups and expansions, we received good feedback. Mandal harbor could be as an ideal location for scrapping of old equipment and for wind power”, says Wilhelmsen.