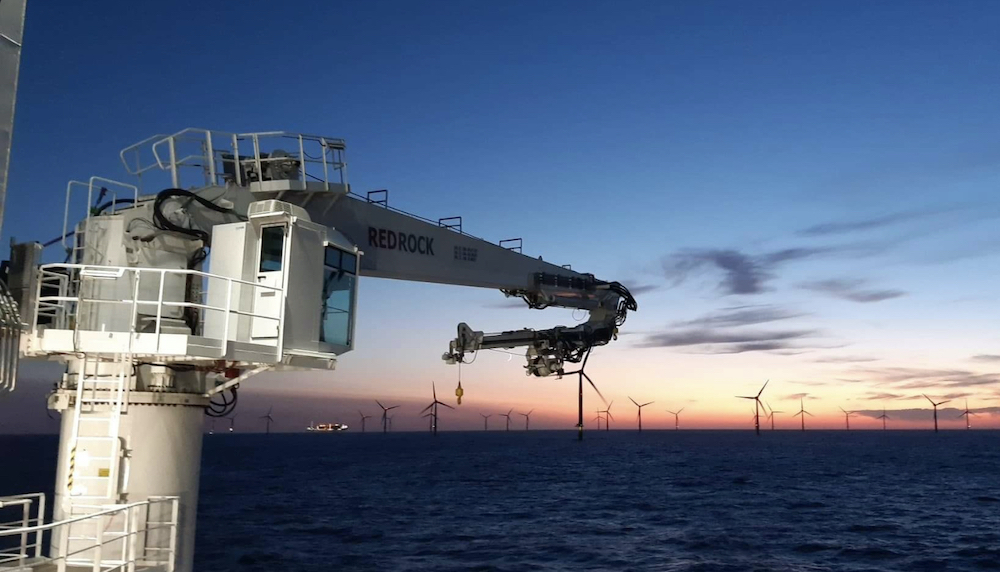 The Red Rock 3D Crane is aimed towards the offshore wind market.

The concept of 3D compensation has been around for a few years and developed mostly within the offshore market. The idea is to keep a single point stable and in a constant position when everything around it is moving.

“After testing at sea with high waves and wind speeds, the Red Rock team is happy to say that the system works well, and the customer is able to perform load transfers from vessel to wind turbine safely and securely, even in difficult weather conditions. Facing these tough conditions, operators previously would have had to approach the wind turbines at a specific angle or postpone activities, leading to increased operating costs,” according to a Red Rock press release.

As a result of this discovery, Red Rock has developed a software-based system which uses advanced technology to determine the actual motion of the load in real time. This information is then used to compensate for this motion by dampening the effects with our tried and tested 3D tool tip. The result is a design combining mechanical, hydraulic and electrical principles to perform the actions required by the software.

“Looking beyond the traditional design, thinking outside the box and looking at how the customer will use the crane in practice, we discovered early on that there was a missing element to the existing designs on the market. While 3D compensation stabilizes the tip of the crane and cancels out the motion of the vessel on the sea, motions caused by, for example wind forces, add another dimension, and is not accounted for in the traditional 3D compensation system,” explains Jørgenvåg.

“But true to reputation, Red Rock has taken on this challenge. At Red Rock we like to get ahead of the curve and develop technology to not just deliver a product to specification, but deliver the best possible product on the market,” concludes Red Rock Marine Chief Commercial Officer, Thomas Holte.